How exciting it was to play the Seattle Art Museum during the Figuring History: Robert Colescott, Kerry James Marshall, Mickalene Thomas exhibit! http://figuringhistory.site.seattleartmuseum.org           Many thanks to Earshot Jazz, Seattle Art Museum, KNKX 88.5 FM and to Jim Wilke for capturing the fun! (subscribe to Jazz Northwest with iTunes or Google Play)

Celebrate the holidays with Gail and SWOJO! 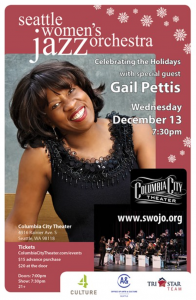 Don’t let life run a game on you! Don’t be lost in a sea of misery! 🙂 There will be at least two chances to catch Gail with the Seattle Womens Jazz Orchestra this summer: August 5 at the Anacortes Arts Festival and August 10 at the Seattle Downtown Association Out to Lunch Series. Have Mercy!!!

Gail Pettis is a two time winner of Earshot Jazz Golden Ear “Northwest’s Vocalist of the Year” award.  Gail’s warm, rich vocals and retro air, hint at the silken sophistication and storytelling style of the young Nancy Wilson.  The Seattle vocalist is excited to return to the island and share her love and appreciation for all who have gone before her and paved the wonderful road called jazz.  Gail has chosen the fitting occasion of the100th birthday celebration of the First Lady of Jazz herself, Ella Fitzgerald.  “It would be difficult to find a jazz fan or performer who has not been profoundly influenced by her music,” Pettis says.  The term et al. comes from Pettis’ pre-jazz days as a healthcare provider and scientific researcher.  The term is an abbreviation for the Latin phrase et alia, which means “and others.”  Pettis chose this term to illustrate her belief that “I never sing alone – I stand on the shoulders of all the greats who have come before me.  This show is my way of honoring iconic vocalists whose work has challenged, informed and inspired so many of us.” says Pettis. The show will include music by Fitzgerald, Sarah Vaughan, Billie Holiday and other greats. Gail also will feature some contemporary artists she considers to be personal heroes and role models. Joining Gail will be the Darin Clendenin Trio and special guest, our Islands’ own jazz great, Martin Lund.  Ticket are available at Darvill’s Bookstore and online at  brownpapertickets.com
Contact: Donna Laslo, Orcas Open Arts

What a wonderful time sitting down with KNKX-FM’s Ed Ronco to discuss music, life and my crazy career path! Link includes interview highlights and info on KNKX Holiday Jam at the Rialto Theater/Broadway Center for the Performing arts in Tacoma WA on December 4 at 7:30. Event is sold out but will be broadcast live on KNKX FM88.5. 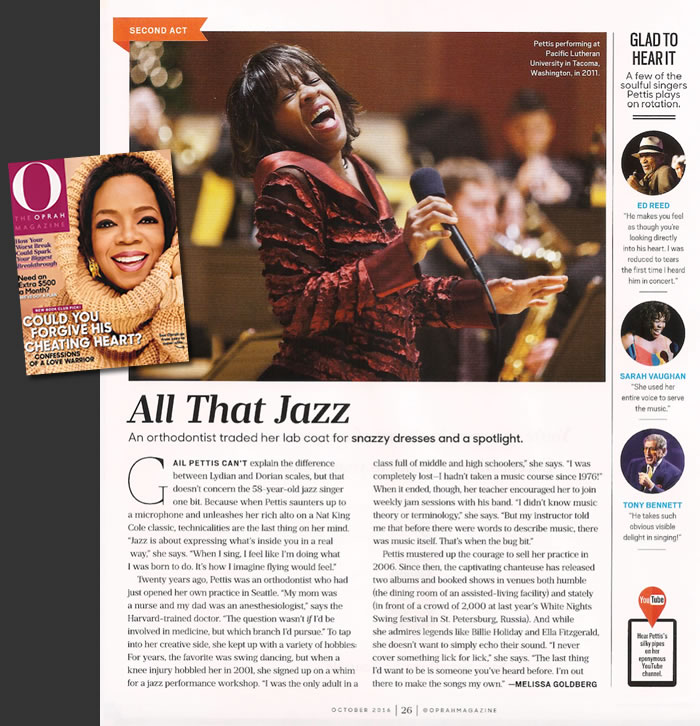 Gail featured in October issue of O, the Oprah Magazine. Grab a copy; on newsstands now!

Directly from this website (mp3s):  Here In The Moment | May I Come In?

Amazon:  Here In The Moment | May I Come In?

iTunes:  Here In The Moment | May I Come In?

What a fantastic event on Sunday at Catalina Bar and Grill, Los Angeles! I enjoyed sharing the stage with Antonia Bennett, Kiki Ebsen, Mark Winkler, Cheryl Bentyne of the Manhattan Transfer and many other fantastic performers in a fundraiser for weSPARK Cancer Support Center. weSPARK is an organization offering free integrative therapies, support groups and creative/educational workshops to all those whose lives have been affected by cancer.

Kudos to Jackie Gibson, Cathy Segal-Garcia and Gary Brumburgh along with Jazz del Corazon and Human Connection for a stellar event! There was hardly anyone in attendance whose life hadn’t been touched by cancer in some way and there was a palpable atmosphere of support and love along with a general feeling of celebrating life.

Meet Yäger, weSPARK mascot! Sure hope there was enough in the budget for an extra treat for this special little guy!

A particular highlight was a visit to the weSPARK facilities the following day for a firsthand look at the facility and the incredible services they provide.

Another treat was having a chance to duet with organizer Gary Brumburgh, a good friend and past recipient of weSPARK services. He tells the funny story of how we met and why this was the song we had to sing! 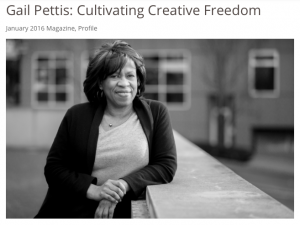 Excited to be featured in the January issue of Earshot Jazz Magazine. Had a wonderful time sitting down with staffer Edan Krolewicz to discuss music, creativity and life. Which may all be the same thing. Read more at: http://www.earshot.org/project/jan2016-gail-pettis-cultivating-creative-freedom/ 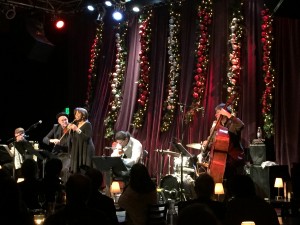 Very happy to start 2016  with some of my favorite musicians on the planet!

What a great time with guest drummer Brad Boal. Great to experience a fantastic response to our new material! Speaking of new things, recent and upcoming changes to Pearl Django have been announced. I’ve enjoyed being able to work with guitarists Ryan Hoffman and Troy Chapman but am excited about the chance to work with returning founding member Neil Andersson and Tim Lerch.

Come join us on Jan 30 at Whidbey Island Center for the Arts as the group wishes Troy a fond farewell at his last official concert and extends a welcome and welcome back to Tim and Neil.

No shows booked at the moment.