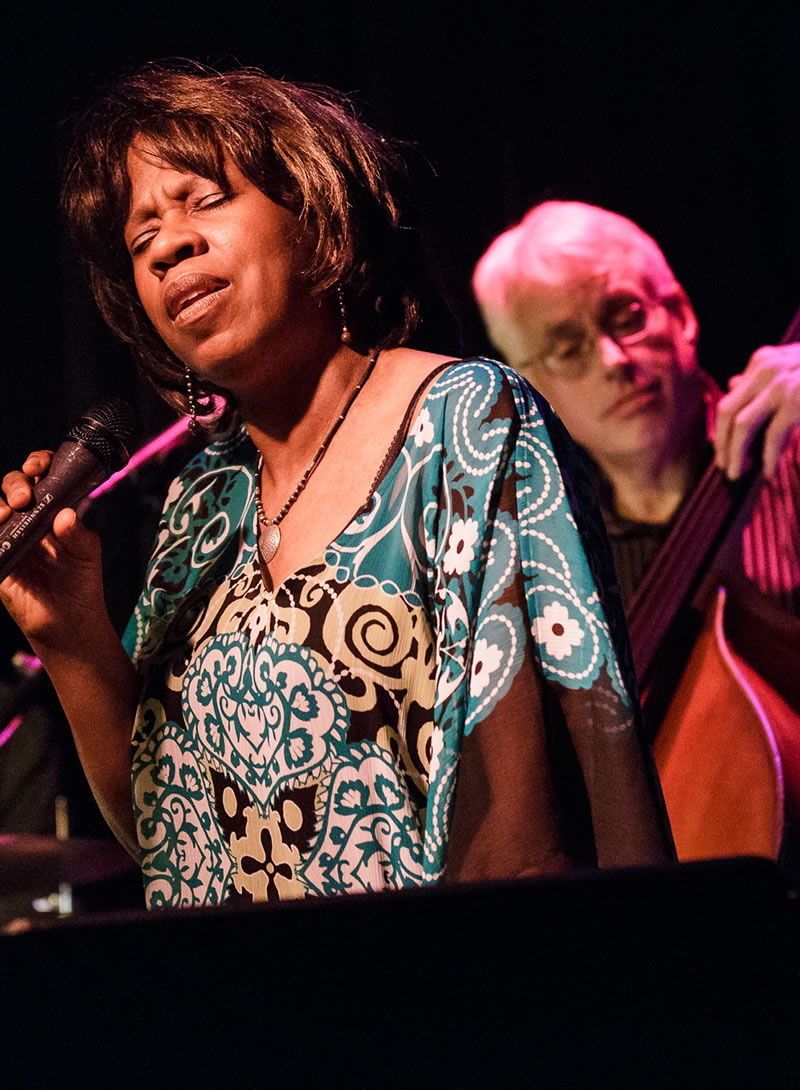 A native of Henderson, Kentucky, Gail grew up in Gary, Indiana, surrounded by healthcare professionals. Yet there was also music in the family tree: grandfather Arthur Pettis was a blues singer and guitarist who recorded for Victor Records in Memphis in 1928 and for Brunswick in Chicago in 1930 and grandmother, Ninevah played piano around Chicago. Along with her sister, Gail sang classical music and hymns at a local Presbyterian church and continued in other school and church choirs in later years. Initially drawn to follow in the family footsteps of healthcare delivery, she attended Ohio State University, Meharry Medical College School of Dentistry, completing an orthodontic residency program at Harvard University, after which she taught and practiced orthodontics full-time for the next 15 years, eventually moving to Seattle WA in 1996 by way of Memphis, TN. Gail spent her days chairside and her evenings with a newfound hobby of West Coast Swing dancing, having become attracted to this particular style of swing because it afforded the opportunity to respond to the music with a partner rather than only dancing through patterns. When an injury took her off the dance floor in 1996, she began looking for other creative outlets, including a jazz workshop led by Seattle saxophonist Darren Motamedy. In this class, Gail was delighted to discover within jazz similar opportunities to interact with the music and with fellow musicians. With Motamedy’s encouragement, she continued to pursue her new passion by participating in jam sessions and also through private study, eventually selling her orthodontic practice in 2006.

Gail enjoys interacting with listeners as well; her live performances have been described by Earshot jazz as going “…from strength to strength, performing a winning, crowd-involving style of vocal jazz.”. As artist-in-residence at the Amersfoort Jazz Festival in the Netherlands in 2006, she was featured artist with the New Manhattan Big Band, also Eddie Conard and the Dutch Jazz Cats on the mainstage and smaller combs in venues in Amersfoort and Harderwijk. Included on this tour was a stop in Kobe, Japan to perform as a guest artist at KAVC Hall as First Place winner of the Seattle-Kobe Female Jazz Vocalist Audition. She has also performed at the Gene Harris Jazz Festival in Boise, Idaho, Jazz at the River Festival in Eagle, ID. Most recently, Gail completed Russian tours in the spring of 2015, performing in Moscow, St. Petersburg, Novosibirsk, Ufa, Ivanova and Perm and returning in the summer for a tour anchored by the White Nights Jazz Festival.

Gail’s debut CD, May I Come In?, (Origin/OA2 Records, 2007), was given a warm reception by XM Satellite Radio and Music Choice Television as well as by stations across the United States and in Germany and Portugal. This recording was nominated for Earshot’s Golden Ear award “2007 Northwest Recording of the Year”. The eagerly awaited sophmore recording, Here in the Moment, was released in January 2010 on Origin/OA2 Records. Gail’s refreshing readings of standard songs on this project have been embraced by listeners, resulting in a 14 week stay (peaking at #5) on the JazzWeek National Airplay Chart, ending up as the most played new female vocal CD on American jazz radio in that year.

Gail has also contributed vocals to Grammy-nominated CD “Colabs”, has song credits in major motion pictures and her voiceover and jingle work can currently be heard on radio and television.

Whether traveling, performing closer to home or spending time in the recording studio, Gail continues to value is the freedom of personal expression she finds in music. For me, emotion is the the currency of jazz. Over the years, I have learned that wearing your heart on your sleeve is not always the best approach to every life situation, but within the context of music, vulnerability always feels right.”

When we select entertainment, we not only look for artists who have honed their skills, but we look for artists who connect with the music they perform and with the audience they are performing for. Gail Pettis, in our opinion, can do all of these things and more.
—Craig and Laura Baker
proprietors, Bake’s Place

No shows booked at the moment.