For vocalist Gail Pettis, it isn’t enough to simply know how to sing the jazz standards. Crooning ballads and familiar tunes is nice, but Pettis is a vocalist searching for more. If you’ve seen her recent performances at Bake’s Place in Redmond, the Fireside Room at the Sorrento Hotel in Seattle, or La Spiga on Capitol Hill, then you’ve probably witnessed that exploration. A performance provides Pettis the opportunity to process, learn, reflect, and quite often unpack a tune in search of its core feeling and emotion. It’s a goal that Pettis frequently achieves, and with a soulful grace that makes the process seem almost effortless.

It’s remarkable, really. And it’s something I asked Pettis about in May, when we met at a Broadway coffee shop, on what happened to be her forty-seventh birthday. “Having coffee, which I love, and talking about music, which I love, is a great start to my birthday,” she said. During our interview, Pettis exhibited a quiet assurance as she explained what she was looking for through music. “As I experience it, the currency of jazz is emotion,” she explained. “That’s what you give and hopefully get back. Many of my song selections are a result of how I feel after listening to a particular song for the first time. Several of the tunes I perform were chosen after hearing only an instrumental version and discovering the lyrics much later.”

That’s how Pettis settled on tunes such as “In the Wee Small Hours” and “The Touch of your Lips,” two songs, when performed by the Randy Halberstadt Trio several years ago, resonated for her — and that she performs quite well. “But it’s about more than just the song choices. I like to share with people what I experience when I sing. So far, people have responded positively, and that has been very gratifying.”

The journey leading to that experience traces back to Gary, Indiana, where Pettis grew up. Her parents were music fans: Ray Charles, Nancy Wilson, Gloria Lynne, and Maxine Brown records filled the home. Pettis’s mom, Evelyn, and dad, Arthur, sang casually around the house, and her grandfather was a blues guitarist in Chicago during the late-1920s and early-1930s. Pettis and her sister, Terre, sang in church, school choirs, and musical theatre productions. As a young person, Pettis joined the high school band. Initially, she wanted to play the tuba. The director, however, needed a French horn player. If Pettis could learn to play it, she could join the band. “I became fairly proficient and grew to really love it,” she said. “One of these days, I would like to pick it up again and see if there is room in the world for jazz French horn.”

Two years out of high school, though, and Pettis had stopped playing the horn. She occasionally performed choral work, but music was not the priority that it is today. “I lived in Memphis for about ten years,” she recalled, “and I don’t know if I stepped foot in any place on Beale Street the whole time. That was blues territory, but I wasn’t into blues or jazz at all. Can you believe that?”

She arrived at music again through dance. When Pettis moved to Seattle in 1996, she learned West Coast swing: a style of swing dance that is less about the jitterbug and ponytails and big skirts, and more about communication and improvisation. “I was dancing heavily,” she said. “It was the kind of thing where if you did it enough, there was kind of a Zen that you got into and really enjoyed. West Coast swing really lends itself to improvisation. Mastering the fundamentals gives you the freedom to respond to anything happening in the music. For example, if there is an interesting bass line, you can interrupt or replace part of the basic dance pattern to mirror what you hear in your footwork. Meanwhile, your partner is either joining in or responding to a different component of the music — but it all works.”

Pettis danced for about three years before a knee injury permanently kept her off the dance floor. So she turned to jazz. In 2002, she enrolled in a jazz performance ensemble workshop at MusicWorks Northwest taught by Darren Motamedy. It was her first formal music course since leaving high school in 1976. “I was the only adult and the only vocalist in a room full of middle school and high school horn players,” she recalled. “It was interesting because they were so conversant in music theory and musical terminology, and I knew very little. Whatever I had learned in 1976 had long since been forgotten. Darren would ask the class a basic theory question, and I wouldn’t have an idea. I taped the classes so that I could learn because I couldn’t take notes using the terminology that was being used.”

The following year, Pettis enrolled in jazz workshops taught by Dee Daniels (at the Experience Music Project) and Greta Matassa. 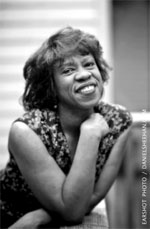 PHOTO BY DANIEL SHEEHAN
“[I]t’s about more than just the song choices,” says Pettis. “I like to share with people what I experience when I sing. So far, people have responded positively, and that has been very gratifying.”

Looking back, Pettis can see that her past experience with West Coast swing actually informed her new experience with jazz. “I feel like jazz is a pretty natural transition from West Coast swing because there are a lot of similarities — mostly listening and responding,” she explained. “And you can dance with the same partner to the same song, but no dance is ever the same. You hear something different and you feel something different each time.”

Perhaps the records her parents played while she was a growing up influenced her decision to sing. She recently opened a box of her father’s old records, and she is currently fixing her turntable so she can listen to the them and, perhaps, identify some influences. “As I was unpacking these records,” she said. “I started to wonder how many people may have been an influence byond the ones I actually remember hearing. I’m anxious to find out if music from the more unfamiliar artists resonates on some level.”

To be sure, Pettis has found inspiration and influences from varying sources.

She adores the work of Bobby Caldwell and Kevin Mahogany. “I love the way I feel when I listen to them,” she said. In particular, a Caldwell album of standards continues to inspire. “When I heard him sing those standards,” she recalled, “I fell in love with every song.”

And jazz singer Greta Matassa, with whom Pettis studies, has also provided inspiration. “Greta is a wonderful and generous,” said Pettis. “She has a natural gift for teaching and she knows how to zero in on exactly what needs attention.”

She also finds inspiration and support within the Pacific Northwest jazz community. She networked early with some of the region’s top jazz musicians — pianists Randy Halberstadt and Darin Clendenin, and bassists Jeff Johnson and Clipper Anderson — with whom she continues to perform today. “I feel incredibly fortunate to be able to play with musicians of this caliber,” she said. “I have grown so much by working with them and being influenced by their musicianship, professionalism, and the sheer love of what they do.