Reviews / Cadence Magazine: May I Come In 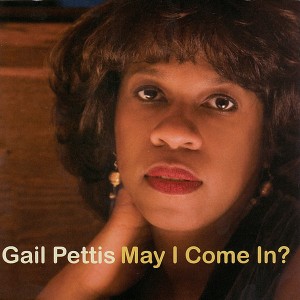 CD: May I Come In?
Cadence Magazine
Review by Alan Bargebuhr

“May I Come In?” brings to light the hitherto recondite vocal gifts of Gail Pettis. Despite having established herself in and around her Seattle base, and in various foreign ports of call, such as The Netherlands, where she was recently artist-in-residence at the Amersfoort Jazz Festival, and in Japan where she was guest artist at the Kobe Annual Jazz Vocal Queen Competition, here at home she remains more or less unknown east of the Cascades. This CD, if it gets any sort of distribution and notice, should help to rectify that, and this is my contribution to setting things right. Happily, she’s made it easy, for here, on her initial release, we find her with all her vocal plucks in town, and one is only left wondering, why this is only her first recording. She has a lovely contralto voice, with depth of texture and tone, and breadth of range. She phrases beautifully, enunciates clearly, and obviously understands the necessity of conveying the song stories convincingly. She sings in tune and makes it sound as natural a breathing.

This recording is the result of at least two separate sessions, as there are two distinctly different trios in support, albeit with an overlapping drummer. Halberstadt and Johnson are two thirds of the trio backing her for six tracks, Clendedin and Anderson for another five. Ivester is at the drum kit for both. Bassist Jeff Johnson is Ms. P’s sole support on a stunningly nuanced “Accustomed,” and pianist Halberstadt her only assistant on “Before,” which, incidentally, is his own tune: both music as lyric, as his is the only credit listed. Unfortunately, it’s not a very strong vehicle for such an accomplished singer as Pettis, but let’s not question its inclusion on the program. It may be about the regard with which each views the other. The song is one of those you’re-the-love-I-waited-for celebrations, and contains far too many cliched lines, if not ideas. The performance, however, is all but rhapsodic and comes close to redemption. But the track, positioned as it is near the end of the program, is part of the album’s final four flaw, in that these last tracks are, from the point of view of repertoire, a considerable let down when measured against the first nine. “If I Were You,” is not the song Billie recorded in 1938, nor is it the Rodgers & Hart song of identical title, nor-finally-the song Maria Muldaur sings on her Southland CD. It is, as far as I can determine, a song Ray Charles “used” on one of his country & western digressions. Strange that Ms. P. chose to resurrect it for her initial recording. “Dream” is a disposable Bobby Caldwell tune, but I’m relieved to be able to report that Ms. P. sings it as “The Guy I Dream About,” just as she corrects the gender on the final track, when she sings, “He Spoke To Me,” which, if anyone’s terribly interested, is no the Prince tune of similar (but not identical) title. Still, the first nine tracks are more than enough to carry the session(s). Gail is deliciously soulful on “Come in,” seductively playful on “Good Girl,” as she stirs memories of Ruth Brown, rhythmically sure footed in accelerated waltz time on “Show Me,” and happily scatfull on “Just Found Out.” The first nine tracks, then, are all that’s needed for a most formidable recorded debut.